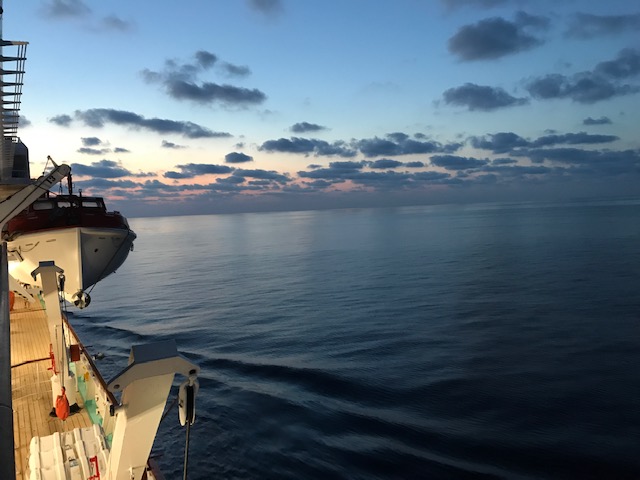 Surfing the web recently we came across a bargain deal on a Pullmantur Cruise flying from Malaga to Athens, and then cruising back via Crete, Malta, Sardinia and Cartegena in Spain. Christina’s brother Patrick had been on the cruise line previously, and he enjoyed it, although he pointed out it was quite basic but the food was good. Also a past client of ours once went on Pullmantur and said it was a wild party, but was great fun, and he was a discerning client. With this in mind we took the plunge and pressed the button!

Well we are currently sailing between Crete & Malta on a sea day, and thought this would be the ideal time to put pen to paper, or finger to keypad! So here’s our low down on Pullmantur…

The flight from Malaga on Vueling was ok, and they actually did luggage handling too so you never saw the suitcases from check in to the cabin. A real plus as we had Christina’s father and his disabled partner with us. The transfer too was well organised, and contrary to reports we have read, the check in was smooth and efficient.

Arriving at the ship we were shown to our cabin, a balcony suite on deck 9 (9102). The cabin was fairly basic, as the ship is old and now very dated, carpets worn out, small wardrobes, small bathroom with a good shower, and sliding balcony doors on to the terrace with two chairs & a table. To be honest we were pretty much expecting all of this as we read some reviews in advance. As I said the ship is old and was constructed in 1990 as one of Celebrity Cruise Lines first purpose made vessels. I’m a firm believer in ‘you get what you pay for’!, and this cruise was cheap at £800 per person for a week all-inclusive including the outbound flight, so we weren’t expecting 5* luxury for our money!

The passengers are predominantly Spanish, with a smattering of other nationalities, unsurprising considering it’s a Spanish cruise line sailing back to Malaga. We thought this would be a great time to polish up on our Spanish, which isn’t great, but they all speak so quickly it’s hard to keep up! They do make announcements in both Spanish & English, and most crew members speak English too, so our verbal practice is actually going out of the window!

Now to the party animal section! The first night we decided to retire early as we were all tired, so our heads hit the pillow around 11pm. Our deep slumber was encroached upon however at 2am by a loud thumping noise, and the floor was literally vibrating! Our cabin, unbeknown to us, was situated directly over the dance floor, with the disco going on until 3am. Nightmare. Last night was exactly the same. We rang down to see if we could move cabins but to no avail as the ship is full. Looks like we will be suffering the disco every night now until we get back to Spain. Well if you can’t beat them……jump overboard!!!

Just to add a quick addition in here to the blog.. The pursers desk just found us two fantastic junior suite cabins on deck 10, hooray, with no noise, lovely large balconies, and refurbished bathrooms. We could actually be on another ship! We can relax and enjoy now. What a difference a cabin type makes. If you’re thinking of booking and can afford the upgrade then go for the Junior Suite!!

Today on deck they had some kind of Latin American aerobics, and about 100 people all around the pool were imitating the dance teacher on stage to the loudest music you’ve ever heard, the speakers nearly exploded! This was followed by a Freddie Mercury and Queen tribute band, once again at full volume. If you want a peaceful, relaxing cruise then this isn’t for you! We watched some of it, then escaped back to our cabin! This cruise is definitely party, party, party and then party some more.

The public areas are ok, but once again tired due to the ships age. It is going in for a refit in November for a week, so hopefully it will give it a bit of an uplift. There are a couple of bars for a pre-dinner aperitif, but sadly the cosy pub like bar is reserved for people who have opted to upgrade to ‘Waves’ level, this is an additional 300 euros per week, and includes access to the cosy bar, canapes early evening, a separate sunbathing area, and priority gangway disembarkation/embarkation. Personally we can’t see the benefit ourselves as we tend to be ashore most days, but I guess if you were doing a transatlantic then it may be a good option. The shops are well stocked with the usual cruise paraphernalia, and there’s quite a nice library and card table room, which is usually packed with Spanish as they love their cards and dominoes.

There is a casino on the ship with the usual roulette and card tables, slot machines etc, and a bar within with soft seating and a stage for a band. Last night we went to the show in the Teatro, and it was surprisingly good! An hour of entertainment showcasing dance from around the World, they really put their hearts into it. Probably one of the best shows we’ve seen on a ship.

The all-inclusive package is very basic. Acceptable Red, White and Rose Spanish wine, Spanish beer, plus bottom shelf spirits. You can upgrade your drinks package for approx. 17 euros a day, but to be honest it’s just not worth it. We like a good whiskey on the rocks, but the best they have is Johnnie Walker Red Label at a supplement, the black is nowhere in sight! We usually cruise on Seabourn, so we are thoroughly spoilt I’m afraid! Even Tui cruises offers top shelf brands at a reasonable supplement.

Now to the food…

Pleasantly surprised we are happy to say! This is probably the best part of the cruise. There’s a great selection at breakfast, with fruit, hot selection plus cold cuts etc. Lunch is a buffet, and there’s always a roast joint plus many other hot and cold dishes to choose from all with a Spanish influence, plus a salad bar. At dinner there is a large selection again from a pretty extensive menu, including various meat and fish dishes, tapas, a choice of soups and salads. The food is presented well and the service is efficient, a little overly so sometimes, with plates being cleared before the last person has finished eating. All meals come with the obligatory free flowing house wine, just watch the pouring though otherwise you will leave the table wobbly, and it won’t be the ship’s movement…! The cuisine isn’t fine dining standard of the likes of Cunard or Seabourn, but for what we paid it is quite acceptable, and there’s always something on the menu to satisfy you.

So to sum up… great value, good food choices, extremely lively with a constant party atmosphere, an older style ship needing refurbishment, mostly Spanish speaking staff and guests. Would we cruise with them again?….not sure, probably not. We personally prefer to go for a higher standard cruise, with superior bar choices, and a less frenzied party atmosphere. The only reason we chose this cruise is that it ends up back in Malaga which is very convenient for us!

No turn down service in the evening, so you have to dry your own towels overnight

Pool towels on a 30 euro refundable deposit system, and you can change them as frequently as you wish

They do supply body lotion, shampoo, and shower gel in the cabin, but they are of a basic standard, no Molton Brown here!

A bit of hard sell at dinner for menu upgrades including lobster and fillet steak, all at a supplement of course..

Dress Code : Smart casual every day, trousers and shirt for gents, and ladies smart casual, or dress up, anything goes. There is one gala night, and they suggest dark suit for gents and cocktails dresses for ladies, but most men wore only jackets and open shirts.