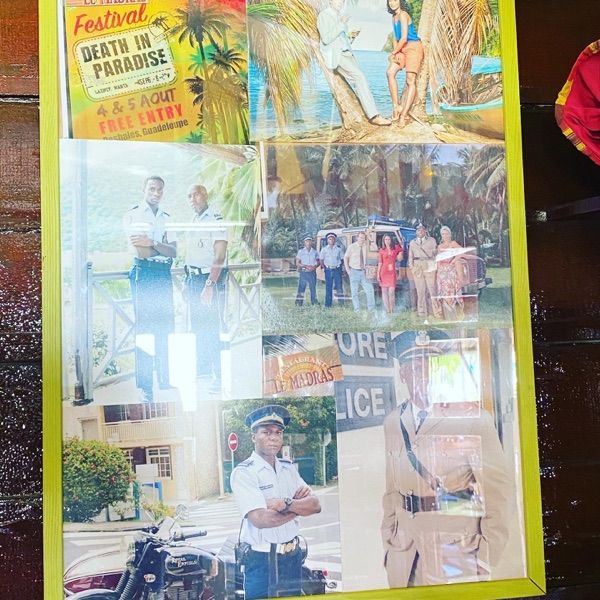 We’ve just had a fantastic day ashore in Guadeloupe, exploring the island independently by minivan with our friends, and the highlight of our trip was visiting the ‘Death in Paradise’ TV set!

After disembarking our ship the ‘Seabourn Odyssey’, we were approached by a fantastic local guide by the name of Thierry, and he arranged to show us the island in his minivan. After negotiating a price (300 euros for the day) we set off on our adventure.

Our first stop brought us to a beautiful waterfall in the centre of the island, very picturesque, with a journey time of approximately one hour from the port. Here we had the opportunity to take a dip in the refreshing waters and take some holiday snaps. The lush rainforest surrounded the falls, and there was a good path winding through the forest alongside the river which gave good access. We only had flip flops on, typical tourists, but we were fine, and no accidents on the way. Refreshments were had at a great little bar in the parking area, and here they also had a much needed toilet, plus a souvenir shop selling the usual tourist paraphernalia.

Next came the main event! After a further half an hour drive we arrived in the village of Deschaies, made famous by the TV hit show ‘Death in Paradise’. It was strange to stand outside the police station next to the church, having seen it on TV so many times, we half expected Commissioner Patterson to appear! Thierry then took us down to the seafront and ‘Catherine’s Bar’ which also featured in the show. Here we sat and enjoyed rum punches, had a light lunch, and took a few photos, all the while enjoying the fabulous view. Thierry was full of it, as he made an appearance in the latest series with his daughter, so we will be looking out for him in January when it airs on BBC!

The journey back to the ship was about an hour along windy coastal roads, but the effects of the rum punches made the swaying more acceptable, in fact we didn’t know if it was the bendy road or the intoxication! About fifteen minutes after leaving Deschaies we stopped for a refreshing dip in the spectacular Caribbean Sea, and a quick sober up..

It was a fantastic day, and if you are visiting Guadeloupe then contact Thierry in advance and he can meet you on the quayside. Thierry’s number is (590) 690162477 or prestigeservices971@gmail.com, he’s a great driver, fair on price and super friendly, plus of course he’s a TV star now as well!

Any cookies that may not be particularly necessary for the website to function and is used specifically to collect user personal data via analytics, ads, other embedded contents are termed as non-necessary cookies. It is mandatory to procure user consent prior to running these cookies on your website.

SAVE & ACCEPT
Scroll To Top