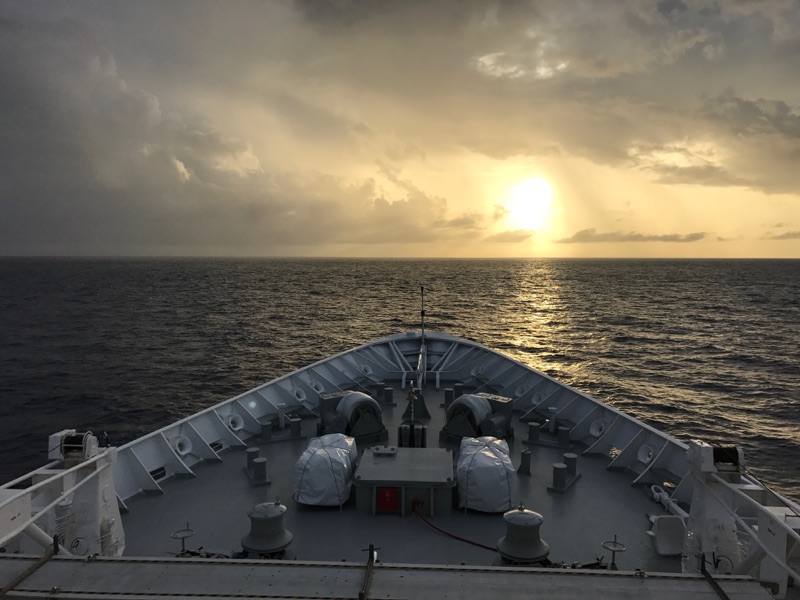 After selling our business in 2017, we joined the Boudicca with Fred Olsen on a fantastic voyage down to Mauritius via the Suez Canal and Africa. The itinerary really sold the cruise to us, as the exotic list of ports of call conjured up images of African sunsets, clear turquoise seas, and dazzling white sandy beaches, and we weren’t disappointed.

During our time in travel we booked many passengers on Fred. Olsen Cruise Lines, and this was mainly due to the demographic in our area, wealthy retired clientele. The Fred. Olsen ships themselves are older vessels, which have been refurbished and are smaller in size, this makes them more personal and easier to navigate, especially when comparing them to the new gigantic ships that are now being released. On-board it’s mostly British passengers, and the currency is the £.

Setting sail from Majorca was really exciting, with the knowledge of a month of luxury cruising ahead of us, and leaving the chilly temperatures of autumn in the U.K. behind. Our first port of call was the lovely Island of Malta, and the capital Valetta, which we have visited before. We are always amazed at the beautiful architecture of the city, being built by the Knights of St John, and how on earth they managed to put the city walls together without modern machinery is pretty awe inspiring. This was followed by Crete the following day, and a short stop in Heraklion where we wandered around the old streets, soaking up the atmosphere and enjoying a coffee in one of the many pavement cafes.

Next came the Suez Canal. An incredible feat of engineering, and a completely surreal experience with the ship gently gliding down the waterway with desert on either side. At certain points the canal was double width, and you could clearly see massive super-tankers passing slowly by. To be on a luxury cruise liner sailing through the sand dunes of Egypt is something not to be missed, and definitely an experience to put on your bucket list! After a few days at sea we arrived in the port of Sharm El Sheikh, and the opportunity to snorkel in some of the best waters in the World. We’ve snorkelled all over the World, but the clarity of the water, and myriad of fish in the Red Sea is breath-taking. The security situation was a bit tense during our visit, as we were the first tourists that they had had since the terrorist problems! We had to keep the curtains drawn on the minibus and it was all a bit worrying. The trip went off without a hitch though, and we had an absolutely fantastic day and made some lovely friends.

On the subject of security our next stage of the journey involved sailing past the Horn of Africa, namely Somalia, and the dreaded pirate territory. With it came the arrival of Marines on-board ship, who dressed the vessel up with rolls of barbed wire and floodlights! We also had a ‘pirate security drill’ which involved sitting on the floor outside our cabin door, while the captain rocked the ship to fend off unwanted visitors! Luckily we managed to pass through the area without a hitch, which was expected, but you never know..

Christina & myself were a bit of a mystery on-board and our fellow guests kept surmising who we were and what we were doing there! I guess it was because we were quite a bit younger than most of our fellow passengers! Telegraph reporters, Marines, entertainment staff, Fred. Olsen Head office staff, you name it they’d thought it up! All a bit of fun though, and there were some lovely people we got acquainted with both at dinner and around the ship.

After a stop in Salalah, Oman, and a visit to the beautiful Sultan Qaboos mosque there, we cruised south to Zanzibar. The name itself conjures up images of Dhows cruising past burning red sunsets, and that’s exactly what we got, absolutely spectacular. We joined an excursion to a sandbank in the ocean on a local dhow, which was a fantastic experience. Sailing out to the island, which only appears at low tide, was a site to behold. Crystal clear waters, white sand, and a fantastic BBQ that had been set up for lunch, a very memorable day, one we will never forget. We were blessed with the weather too, and as the sun shone down the Indian Ocean transformed itself into a multitude of blues, greens and turquoise, stunning. On the way back to the ship we pulled into a side street, and stopped at the house where the Queen lead singer Freddie Mercury grew up. Amazing to think such a World famous person started from such humble beginnings.

Mozambique Island was next, and we joined a bicycle tour. The bikes were old Royal Mail delivery bikes, and it was great fun! The Island itself though was extremely poor, and the locals were thrilled that cruise ships were pulling in and bringing much needed income. They were enthusiastically selling their small handicrafts and souvenirs, and of course we came away with a bag full!. If you ever get the chance to visit Mozambique Island by ship, then we firmly suggest taking a ships tour and not going under your own steam, it’s the safer option.

Dolphin watching in the Comoros Islands, on the largest ocean lagoon in the World, was an absolutely unforgettable experience. Our inflatable boats skimmed across the gin like waters in search of these playful mammals, and it wasn’t long before they made an appearance. It was so fantastic to see them in the wild, happy and free. They swam alongside us, jumped, dived down, and then broke up through the surface, there were hundreds of them. We took some amazing photographs, and the memories again will stay with us forever. A truly wonderful day.

A call into Reunion was our last port of call before Mauritius, and we wandered around the small streets, and along the promenade with views of the volcanic Island all around.

This really was a fantastic adventure, and a wonderful way of seeing far flung destinations from the comfort of a luxury cruise ship. Boudicca itself is a small vessel of only 28500 tonnes, and a capacity of 881 passengers. With a selection of cabins to choose from, you can either go for the inside cabin cheaper option, or splash out and treat yourself to one of the suites. We were lucky to stay in one of the Premier suites, and it was very comfortable. The bonus of a large balcony made our holiday extra special, and we used to sit and watch the World go by on there on many an occasion. The food on-board was excellent, with a great selection at each service. We usually opted for the waiter service option at dinner, and visited the buffet for breakfast and lunch. With fantastic service, great menus and reasonably priced alcoholic drinks you really couldn’t find anything to complain about. Due to the majority of passengers being British there were many home comforts too, so it really was like a home away from home. Great shows, comfortable and well serviced cabins, excellent food, a fantastic array of excursions, and a super friendly crew, made this a holiday to remember. We would love to do it again one day… and if you ever get the chance to do this itinerary then we highly recommend it.