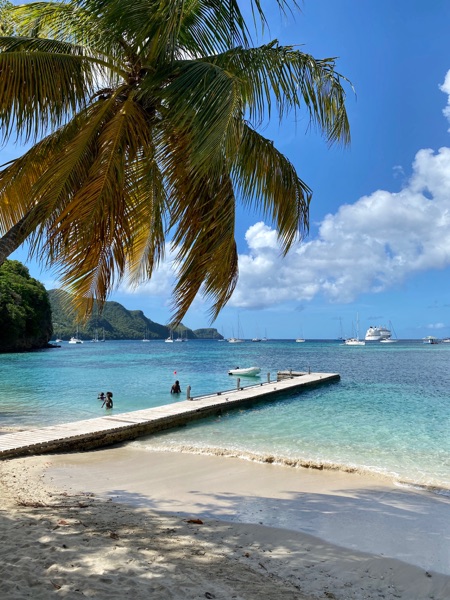 Having visited Bequia on two previous occasions, and being unlucky with the weather on both, we were thrilled to awake to a beautiful blue sky on our port visit this year.

After tendering from our ship, the Seabourn Odyssey, we arrived on the main dock and were immediately approached by local taxi drivers offering tours of the island. We had been advised by a member of the team onboard to take the coastal path named ‘Princess Margaret’s trail’ so politely declined and set off to find the route. It wasn’t long until we found the walkway and it was absolutely stunning. Hugging the coast, it meandered alongside painted clapboard houses, boutique hotels, and small bars. Every turn of the path gave spectacular views of the bay with its crystal clear blue waters, lofty palms rising from white sand beaches, and small yachts bobbing in the harbour. There was some step climbing involved, including up and down on the headland before Princess Margaret’s Beach, so called because Queen Elizabeth II’s sister Margaret once took a swim there.

On arrival at the beach we settled ourselves at Jack’s Bar and hired a couple of sunbeds with comfortable mattresses costing $20usd each for the day. Crystal clear sea, easy gently shelving sandy access into the water and incredible views across the bay paints the scene at Jack’s, absolutely perfect. We ate a light lunch there too which was fantastic, plus great service and a good drinks menu.

If you are lucky to call into Bequia on your next cruise, then Princess Margaret’s Trail is a must, it costs nothing, affords spectacular views, and of course you get some exercise in too which helps when you’ve just disembarked from a cruise ship!!

Any cookies that may not be particularly necessary for the website to function and is used specifically to collect user personal data via analytics, ads, other embedded contents are termed as non-necessary cookies. It is mandatory to procure user consent prior to running these cookies on your website.

SAVE & ACCEPT
Scroll To Top