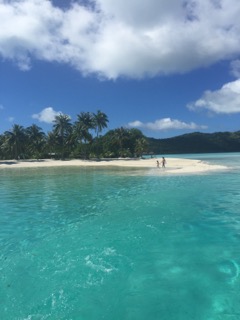 We had read many times that Bora Bora was the most beautiful place in the World, so we just had to go and check it out for ourselves! Travelling with friends as part of a West Coast of America trip, we took a flight to Tahiti and an onward connection to Bora Bora where we joined the Paul Gauguin Cruise.

Flying into Bora Bora was amazing, and the scenery absolutely breathtaking. Surrounded by an impossibly turquoise lagoon, and with the centre of the Island dominated by Mt Otemanu it was like stepping into a Robinson Crusoe novel, or a scene from the film ‘The Bounty’. Gazing out of the window as we made our descent, we could easily conjure up the scene of an old explorer ship approaching this paradise for the first time after so many days at sea, and the crew being spellbound by the beauty of the place and never wanting to leave.

We had actually broken with the ships usual itinerary departing from Tahiti, and managed to join it a few days early in Bora Bora, so embarkation was a breeze as we were the only ones getting on. From the moment we stepped on-board we knew we were in for a treat, being presented with a flute of champagne at reception during check in. The ship itself was fairly small and intimate at only 1170 tonnes, and with a maximum of 332 guests it had a lovely personal feel to it. Our allocated veranda cabins were also very comfortable and well presented.

The main draw for us when booking this cruise was the destinations it visited. We can’t imagine it would be very easy travelling between the Islands in French Polynesia by plane, and we expect time consuming, so to jump on a luxury cruise ship that called in at some spectacular places to us was the perfect solution. We were right. The Islands we called in at were absolutely spectacular, and each different in its own way. We particularly enjoyed Moorea, where we took an island tour into the mountainous interior, gazing down from the heights at the ocean of every colour of blue imaginable is permanently etched in our memories, and we have some amazing photographs in case they start to fade! The beach barbeque day in Taha’a at the cruise lines private ‘Motu Mahana’ (small coral island) was something special too. The ship set up the lunch on a small atoll, with crystal clear waters and spectacular views, and tendered guests over for an unforgettable day of fine food and swimming in the clear warm waters.

The highlight for us though was the overnight stop in Bora Bora, which we luckily did a couple of times due to us slightly extending our cruise. This gave us plenty of time to take part in the various excursions on offer. We first opted for the trip to the private motu, offering crystal clear waters, a pristine white sand beach, peace and tranquillity, and eye wateringly beautiful views back across the lagoon to Mt Otemanu, it’s hard to describe how perfect it was. As a bonus, on the tender journey over to the Motu, we were lucky enough to be joined by a playful pod of dolphins, truly magical.

There were many options for sightseeing including boat trips on the lagoon, island tours including the World famous ‘Bloody Mary’s’ restaurant, and helicopter flights over the island. We opted for the helicopter trip on one of the days, and we absolutely made the right choice. The views from above were mesmerising, and we flew to a neighbouring island where a pod of dolphins were swimming in the shallow waters of the lagoon. The pilot took us down for a closer look, it really was spectacular, and we highly recommend it if you ever happen to be in Bora Bora. On One of the evenings we visited Bloody Mary’s just to say we had been! We had a great night, and as always the restaurant was buzzing with people. We selected our fish from the display of the days catch, Red Snapper, and they cooked it to our liking. Delicious.

The food on-board the cruise was excellent, as was the selection of drinks available on the all-inclusive basis. There was a choice of three dining venues on the ship including the main dining room ‘L’Etoile’, ‘La Veranda’ for al-fresco dining, and ‘Le Grill’ by the pool. All served delicious cuisine with French flair. The cruise itself was French operated, and from past experience we’ve always found the French the most discerning clientele when it comes to food and wine so this definitely reflected in the standards! The public spaces on the ship were very comfortable, and they had a wonderful bar out on the back deck of the ship, which offered live music in the evenings. Sitting out having sundowners with the backdrop of French Polynesia, and the warm South pacific breeze enveloping you is pretty much hard to beat. Special moments.

We thoroughly enjoyed our time on Paul Gauguin, and if we were ever in the South Pacific again we would definitely consider a second cruise with them.

We flew from Honolulu to Tahiti direct with a flying time of approximately 6 Hours,plus the internal flight to Bora Bora approximately 1 hour.

Remember to take your snorkel with you!