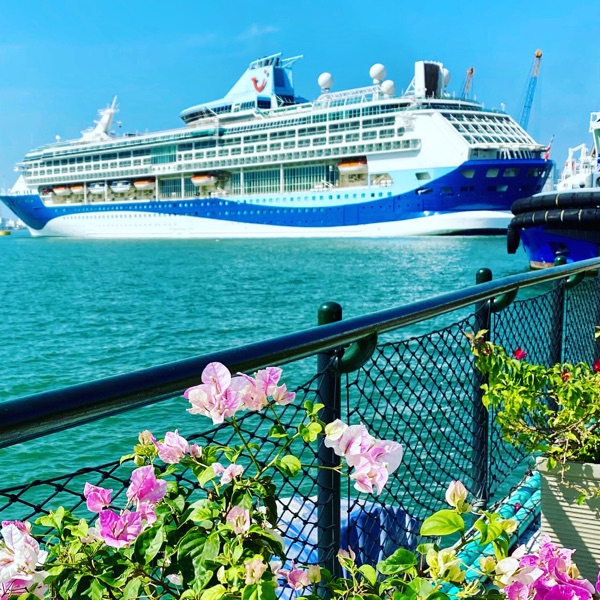 Christina’s father joined Marella Discovery 2 in Malaga at the beginning of December for a transatlantic cruise to Jamaica, and then decided to stay on for the following Christmas fortnight cruise. Well, Christmas is of course a family time, so he asked if we would like to join him on it. We are not the type of people who need to be asked twice!!

For us it was a slight dilemma, in that we were already in the Caribbean on a cruise from Barbados with friends, so the choice was whether to fly home and then back again, or stay on.. you can guess which option we went for! We decided to stay on the Seabourn Odyssey for an extra week (see separate blog), and then flew from St Maarten to Jamaica for 3 nights (see separate Sandals Hotel blog) before joining the ship in Montego Bay. We really didn’t know what to expect from Marella, especially after recently disembarking from the luxurious Seabourn Odyssey, but we were pleasantly surprised, and the cruise offered good value for money.

Marella Discovery 2 is a refurbished ship, which used to belong to Royal Caribbean Cruise Lines, and was previously known as Legend of the Seas. We’ve sailed on Legend in the past, so were intrigued to see what changes Marella had made, and to be honest we hardly recognised the ship apart from the Grand Atrium, which can’t be altered too much! Catering now mainly for British passengers, and a mix of age ranges, the ship has a lot of new additions which sit comfortably within its market. From fast food on deck with its British inspired beach hut seating, British inspired menus at lunch and dinner, and an all-inclusive package, which meant the drinks kept flowing, all adding to the atmosphere on-board.

We opted for a balcony cabin on deck 6, and it was quite adequate. There was a small terrace with table & chairs, comfortable king size bed, limited wardrobe storage with a small safe, and a bathroom with walk in shower plus storage cupboard. In hindsight we should have upgraded to a deluxe balcony, they were much more spacious and had sunbeds on the balcony, perfect for those days at sea when the pool deck was heaving with people! We managed to visit a few cabin types on the changeover day in the middle of our holiday, so have listed the youtube links here for you to view them…

There were seven eating venues on the ship, the main one being ‘Restaurant 47 degrees’, and we tended to head there mostly, being a family group. In Restaurant 47 it was waiter service breakfast, lunch, and dinner, on a free seating basis, so you could dine at a time of your choosing between the opening hours. Unfortunately, the only drawback of this was that most people wanted to dine at the same time for dinner, around 8pm, so there was always a backlog at the door, and you were given a pager to alert you when a table would be ready, usually a wait of 45 minutes ! **Note here.. take a pager prior to going for your pre-dinner drink, and then it works out just about right! The menus changed most evenings and the choice was good, quality of the food was also good. Christmas lunch/dinner was well organised with three sittings, and a fantastic festive menu and party atmosphere, we thoroughly enjoyed it.

Other dining options included the buffet restaurant, ‘Islands’, which offered a selection for breakfast, lunch & dinner. To be honest it was better to be waited on in the mornings in the main restaurant rather than the buffet, and the fruit selection there was more varied. Lunch always included a selection of salads, and usually a roast joint of meat, plus many other options. The food was pretty good, and there was always something that would take your fancy. We never ate in Islands for dinner as we preferred once again to be waited on. Afternoon tea was also served in Islands in the afternoon, and included hot scones with cream, sausage rolls, a selection of sandwiches, and more.

On the floor above Restaurant 47 there was an Italian restaurant named ‘Gallery 47’, and this was included in the overall package without a supplement. A limited menu was offered, which didn’t change, and the dishes were well presented and tasty. They offered a Carbonara in a huge cheese wheel at a small supplement, which we enjoyed on a couple of occasions. Once again everybody wanted to eat at the same time so the pager system operated there too.

In addition to the above there were a couple of supplement restaurants on deck 11 including Kora La, an Asian restaurant, and the Surf & Turf Steakhouse. We didn’t use either of the restaurants on this occasion, but on a previous cruise with Marella we visited both restaurants and found the food to be of good quality and tasty. The supplement from memory was around £25 approximately, and it made a nice change from the main dining room.

During the day the ship also offered pool snacks such as burgers, chicken wings, chips, sandwiches & salads at the ‘Snack Shack’ on the pool deck. This was a busy little venue and they had a drinks service too. The seating was arranged in beach hut style booths, once again in keeping with the British theme on the ship.

Entertainment on our Christmas cruise was excellent. Cruise Director Phil did a fantastic job of creating a festive atmosphere, and the Captain himself ‘Chris’ loved taking part and picking up the microphone! There was a full theatre on the ship offering nightly shows, a ‘Live Lounge’ featuring live acts including ‘Manuel’ the pianist – amazing, ‘Entourage’ the band – fantastic, a saxophonist and a singer/guitarist. The music was one of the main things we loved about the cruise, it made for a great atmosphere onboard. During the day there were all manner of activities you could take part in if you so wished, we usually just escaped back to our balcony when they started!

The all-inclusive package on the ship was very good and included a large selection of drinks as standard. We opted for the premium drinks package at £50 per person per week, and found this excellent value for money. We are whiskey drinkers and they included Glenfiddich, Glenlivet, and Black Label on the premium, also a great selection of gins accompanied by Fever Tree tonic water.

Our itinerary on this cruise visited Central America, and we had some great days ashore (see separate blogs under ‘cruise port’ section on our website). Unfortunately, on the second week however we contracted a bug on the ship that was making its way around, and this meant we missed out Guatemala and Belize, and it really did mar the last week of our holiday. Very unfortunate.

Travelling to and from the ship wasn’t as smooth as flying into Barbados, the Jamaicans have a lot to learn with the bonded luggage system. In fact on our return flight they forgot to load the bags onto the plane resulting in a 2 hour delay!! The ship had only just started operating for the winter when we arrived so I guess they were a bit new to it all. Basically with bonded luggage you check the bags in at your UK airport and the next time you see them is in your cabin. Same on the return, you put your bags outside your cabin on the last night, and the next time you see them is at the airport in the UK, all very well organised. As I said though, it was more seamless in Barbados!

To sum up, value for money on Marella was very good. The drinks package was excellent, and the food was good, the entertainment was fantastic, and the ports of call were varied and interesting. The service from the staff on the ship was first class, they really couldn’t do enough for you, many of them originated from the Philippines and their hospitality was incredible. For us though I think we prefer slightly smaller ships with less people, we found it a bit busy at certain times, especially sea days. For families with children, and customers who love lively pool entertainment etc, this cruise is the perfect option.